Hei, my name is Ludwig Kuhn, and I’ve been student at the Technical University of Berlin.

My subject during the Bachelor as well as the Master studies was Engineering Science, with a special focus on fluid flow mechanics and technical acoustics. During my Master’s, I took a lot of courses regarding analysis and design of wind energy turbines. Since I never got to the point of doing exchange, I pictured the Master’s Thesis as last chance to go abroad during the studies.

I remembered Prof. Thamsen from the Department of Fluid System Dynamics talking about the opportunity to write a Thesis abroad, that’s why I contacted him and was directed to Markus Fischer and the Nordic Water Network. This contact was established around fall 2017, with my intention to do the exchange after the summer term 2018. It was good to start planning everything early. Markus gave me the possibility to choose a supervisor at one out of five partner universities, and I decided to go the furthest north possible, to Norges teknisknaturvitenskapelige universitet (NTNU) in Trondheim.

I was lucky to get in touch with my supervisor, Lars Roar Sætran, in March 2018. He just did a sabbatical and had an office at TU Berlin. He offered me several projects to choose from, and we talked a lot about living and studying in Trondheim and Norway. I told him, that I would like to do experimental work, which was fine with him.

The contract was set up in June, and the final confirmation from NTNU came in July. That was a bit late, since the autumn term at NTNU starts mid-August. The most difficult thing was getting an apartment, since I was told that I wouldn’t be eligible for the SiT (Students in Trondheim) housing. Later, I found out that I could have applied for a spot anyways. Most of the private rented apartments I found on www.hybel.no and www.finn.no were for one-year rent only. Therefore, I was grateful to get a room in a shared apartment in Bakklandet, very close to both the city center and the NTNU Gløshaugen campus. I lived there together with three Norwegian students. 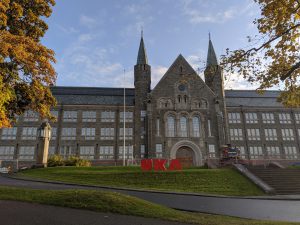 The work at the master’s thesis started right away. I got a great introduction to the wind tunnel, the measurement equipment and the wind turbine model by Jan Bartl and Franz Mühle, two former PhD students of Lars. I was able to have a couple of days in the wind tunnel to do initial measurements and think about the experiments I had to conduct. For the final experiments, I got 8 days of wind tunnel time at the end of October. I was able to work very independently. The processing of the measurement data took the rest of the year, and the writing process last into spring 2019.

Besides the Master’s Thesis, I took a course called “Introduction to Norwegian History”, to experience the university system. It is quite different from the German system, and involves a lot of taking the students by the hand. Most of the courses are held in English, and both lecturers and students are very fluent in speaking it. Communication with Norwegians was never a problem, not even with seniors.

The Norwegian culture is very nice. I was lucky enough to have a friend driving me up to Trondheim, and along the way we were really amazed by the relaxed traffic situation. Basically no one tailgates or blows his horn, and with the maximum speed of 90 km/h (120 km/h at some parts next to Oslo), everything is forced to slow down and take some time. The next thing was the pure size of the country. The trip from Oslo to Trondheim took us way longer than expected, since we were taking the road over the Dovre mountains, Norwegians famous E6.
The main cliché about Norwegians is, that they are very introverted. I experienced them to be very open and friendly. Probably, being on first-name base with everyone pushes that as well. I had very nice talks with my supervisor about our weekend plans, such as hiking and skiing. I never experienced that in Germany. 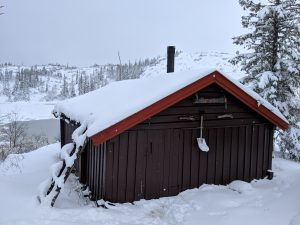 Trondheim itself is the third largest city of Norway with about 190000 inhabitants. With about 20% of them being students, I found myself in a perfect student city. Basically, everywhere you go and everything you do involves students. The universities sports club (NTNU) is Norway’s biggest sports club. You can join basically every sport you want, and there are lots of different music groups and student associations as well. Every year, there is either the worlds biggest student festival (ISFiT) or a big cultural event (UKA). Both of them involve a lot of student volunteering.
The big plus of Norway is the nature, which can be explored by hiking and sleeping in cabins. Most of the Norwegian families have a private cabin in the mountains, and NTNU has more than 20. They are mostly placed in the areas surrounding Trondheim and are reached by bus, train or ferry, with hikes of different length afterwards. The more touristy areas of Norway however are far away, and have to be reached by car (multiple day rides) or plain.

Some of the downsides are the ridiculously high prices for alcohol and sweets, as well as the lack of a proper food and party culture.

Both fall and spring term have their upsides. During fall, a lot of international students are in Trondheim. The term lasts not that long, so most of them are here for 4-5 month only. The fall is very rainy, but it’s also the best season for Northern lights. The spring term includes the proper winter, which can last to April, and then the awakening of the nature as well as the long days in summer. There are also more festivities going on, including the National holiday at May 17th. Personally, I liked the spring term more.

Norwegians (at least in the cities) are very open to foreigners, and therefore it’s also easy to get a job here (if it’s not mandatory to talk Norwegian). I am currently working as a research assistant at the Hydropower Laboratory at NTNU in Trondheim. Many of my co-workers are foreign. That helps creating a very international atmosphere.

In the end, I am very grateful for the chance I got to do this exchange, for all the people from all over the world I got to know and for the unforgetful experiences I had and still have here in Trondheim.