As a student at the Technical University of Berlin I had the luck of hearing about the Nordic Water Network while taking courses in fluid mechanics and got the opportunity to participate at a number of NWN events. Subsequently I learned about the possibility of writing a thesis at one of the partner universities. The application process to write my master thesis aboard was fairly simple, once I talked to some possible supervisors and found a well suiting thesis at the Aalborg University (AAU) under the supervision of Professor Sørensen. Despite the pandemic, my work could take place and was only postponed for a few months, so that I could move to Denmark at the beginning of September.

When I arrived at the university, I was warmly welcomed by Professor Sørensen, who introduced me to all the current health regulations and gave me a campus tour and all the other necessary information. I was immediately taken aback by how direct the interaction was and, sometimes, I was almost laughed at when I addressed someone as “professor” instead of their first name. Although this was extremely pleasant, it took some time to get used to it. The entire supervision of Professor Sørensen and Professor Hærvig stayed just as casual and pleasant as it was at the beginning. They took a lot of time and were always available for questions as my office was only a few meters away from theirs and I was always welcome.

My thesis was regarding Particle Image Velocimetry (PIV) of natural convection along enhanced surfaces.  As I specialized in fluid dynamics in my previous studies, the part of heat transfer in  natural convection phenomena were fairly new for me. Therefore, the first month was based mainly on obtaining theoretical knowledge and getting familiar with the experimental setup and its automation. Once I was able to get the results that needed to be discussed, we had weekly meetings that led to great supervision and where I learned a lot not only about my subject but also about the differences in the functionality of universities in Germany and Denmark. Even though there was a lot to be learned and the project was a full-time job, I was free to decide when to work as I had my own key card to the lab, buildings, and my office. Thanks to this I also had a great time outside the university life.

Denmark in general is not a lot more expensive than Germany, except for alcohol in bars. Denmark has a great social system. This includes great parks with free golf and disc-golf courses, but in the case of Aalborg also a housing guarantee for students. There is a nice website (aku-aalborg.dk) to apply for rooms and apartments, which also includes the option of a housing guarantee which means you will definitely get an accommodation, but it might be one that you did not apply for. In general, these accommodations are priced very reasonably and are located all around the city, making it possible to live fairly close to the university too. However, private accommodations which can also be contacted via AKU, should be viewed with caution as they might have lower standards.

Due to the pandemic, I traveled relatively little in Denmark, but the measures were quite relaxed compared to the German rules. Therefore, the sports facilities were also open, which are very cheap and well equipped due to government subvention. Shortly after my arrival I discovered the “Cable Park” on a city tour, which I can highly recommend. This is a wakeboard facility of a non-profit association. Of course, I immediately spoke with a present member, joined the club, and went wakeboarding the next morning at 6am for sunrise. As many long-term members had a key and always posted on Facebook when they are going, until mid-November there was almost daily wakeboarding before or after work or university hours, followed by a sauna session with an impressive view. Since everyone in the club was always in a good mood, it was also possible to make good friends very quickly. Here I also learned about “Streetmekka”, which is a gym not far from the university where you can do all sorts of sports besides my favorites basketball and bouldering for a monthly fee of 100 Krones (13€). Most of the time there were the same people and the atmosphere was always great. Since new hygiene measures from mid-November forbade the visit 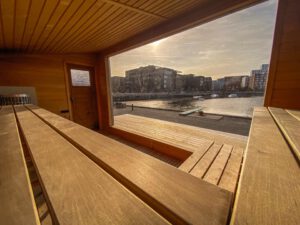 of the sauna and showers while wakeboarding and at air and water temperatures below 8 °C, the hard-boiled members became rare, I spent a large part of my free time in Streetmekka from there on.

All in all, I have to say that I had a very exciting and interesting time and was able to learn an incredible amount in a very short time. For this great experience I am highly grateful to all who made it possible, especially to the Nordic Water Network, Markus Fischer and Professor Sørensen.